Inslee was joined by legislators, tribal members, community members and organizations, and other stakeholders as he signed legislation that made Washington the nation’s leader in battling the climate change crisis.

The governor began the day at the Seattle Aquarium, where he signed SB 5022, regarding single-use plastics.

Limiting single-use plastics and increasing recycling will decrease the demand for oil and move Washington toward greater sustainability while simultaneously protecting the state’s beaches, ocean and wildlife.

To minimize plastic waste, the bill:

Sen. Mona Das, the bill’s primary sponsor, said the policies in this bill are vital to the fight against climate change.

“I’m proud to serve a state that has been a national leader in the work to protect our planet with innovative solutions — solutions that build a healthier economy and healthier communities,” Das said. “I’m thrilled that, with Gov. Inslee’s signature today, SB 5022’s promotion of recycling and reduction of waste is one of those crucial solutions. It is an honor to be partners in this work to serve our neighbors and protect our earth.”

“Even my five-year-old knows, if we do not take urgent action to address recycling and plastic pollution, our waterways and environment will pay the price,” Berry said. “This bill will create a circular market for plastic recycling and cut down drastically on single use plastics. I am proud to have worked with Sen. Das on this nation leading policy.”

Washington will be the first state in the nation to enact a statewide “upon request” policy for single-use, disposable service items. 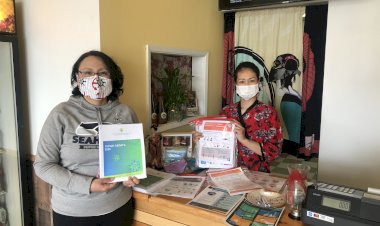